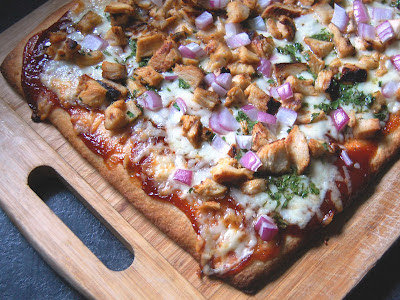 Once upon a time, my husband and I made BBQ chicken pizza. And it was good. Very, very good. And I thought I’d never forsake that version for another.

Once upon another time, my best friend and I went out for dinner and drinks before a concert, and we split a BBQ chicken pizza at the restaurant. And it was AMAZING. And I knew I had to duplicate that version in my kitchen as soon as humanly possible.

Well, I’ve officially found a new go-to version of BBQ chicken pizza – and it is so simple, you guys. Including the crust itself, this version only has six ingredients: crust, BBQ sauce, leftover grilled chicken, Monterey jack cheese, red onion, and cilantro. That’s it. But the ingredients all work together perfectly (the sharp bite of the onions, the tangy sauce, the bright cilantro) and make such a flavorful combination. I used leftover marinated, grilled chicken from a pasta I’d made earlier in the week (I’ll share that recipe tomorrow), and thought it worked really well for this. You could definitely use shredded cooked chicken, or any type of leftover chicken, but I thought grilled chicken worked just perfectly.

1. Pre-bake pizza crust according to directions on package or instructions in your favorite recipe.

2. Top pizza crust with BBQ sauce, shredded cheese, chicken, onions, and cilantro. Return to the oven and cook for 6 to 10 minutes more, until edges of crust are golden brown, cheese is melted, and toppings are heated through.
Posted by Cassie at 8:00 AM

That's how I make my BBQ chicken pizzas - perfection! My boys don't like the cilantro so I usually have to make a tiny pizza just for me. Darn... a whole pizza to myself. ;)