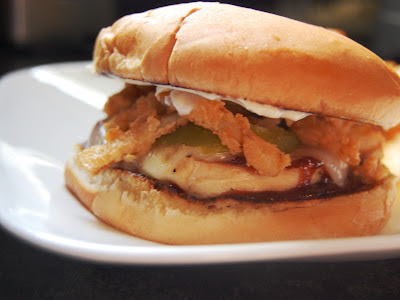 I don’t know how it is with you, but when I start to crave something, I can’t get it out of my mind until I eat it. A few weeks ago, that craving was for Red Robin’s BBQ chicken sandwich. I’ve had it a couple of times and absolutely love it, but it’s hard to resist the siren song of their amazing hamburgers, so it’s not something I get very often when we go there.

I decided to try to recreate the sandwich at home, and I have to say that my version is pretty spectacular. I grilled the chicken, slathered it with BBQ sauce, and topped it with Havarti cheese, homemade onion strings, pickles, and mayonnaise, and put all of that on a butter-grilled bun. The creamy mayo, the sweet BBQ sauce, the crunchy onion rings, and the briny pickles complemented each other perfectly. Cheddar would be a good choice for these, but I loved the tanginess of the Havarti on the sandwiches.

I’ll be making these sandwiches over and over again. And again, and again...

1. For the onions: Halve the onion, then cut each half in half cross-wise. Then slice the onion length-wise and separate all the pieces. Add buttermilk, salt, and pepper to a medium bowl. Add onions and soak for 10 minutes. Dip the onions in the flour, then in the buttermilk mixture again, then in the flour again. Heat canola oil in a large skillet and fry onions in batches until well-browned and crispy. Place fried onions on paper towels to drain and season with salt and pepper until hot.

2. For the sandwiches: Season the chicken breasts with salt and pepper. Grill until cooked through. Using a basting brush, slather the breasts generously with BBQ sauce. Spread each bun half with a layer of butter, and grill until browned and fragrant.

3. Spread more BBQ sauce on the bottom of each bun. Top each with a piece of chicken, a slice of Havarti, some of the onions, and pickles. Spread the top of each bun with mayonnaise. Serve.﻿
Posted by Cassie at 8:00 AM

Oh Red Robin, how I love you. We finally figured out the secret to eating there this weekend - get one burger and tell them you're splitting it. They'll cut the burger in half for you and give you your own pile of fries. For the first time ever I left feeling full but not greasy and overly stuffed. :)

Phew...that got long-winded. This looks great. I love it! Will definitely be trying it soon.