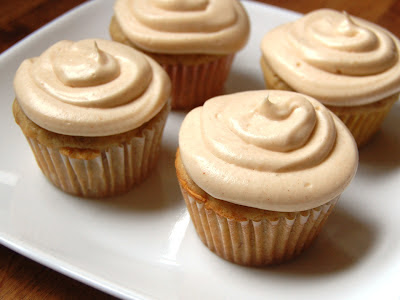 I’m not posting the meal plan today, because I didn’t cook a single night last week. Okay, I think I made sloppy joes one night, but that’s it. All the various things we’ve had going on lately, added to the fact that I have a sinus infection and feel only slightly better than death, have equaled not a lot of time in the kitchen. So basically, I am back to cooking this week, but we’ll just be eating everything I’d planned to make last week. So if you came looking for a meal plan, just check out last week’s.

If, however, you came for the best cupcakes you’ve ever tasted in your life, then I can help you out right now. I made these cupcakes recently for a work birthday (Bananas Foster is the birthday girl’s favorite dessert), and weeks later, everyone is still raving about them. The recipe actually calls for making Bananas Foster, complete with flambéing, then stirring the mixture directly into the cupcake batter. It’s the first time I’ve ever flambéed in my kitchen, and Andrew is still talking about how cool it was. I think I went up quite a few points on the Cool Mom scale when he witnessed me deliberately set something on fire (in a controlled environment, of course).

Anyway, these cupcakes are amazing. The cupcakes themselves are moist and rich, with the barest hint of rum. The frosting is super-sweet and pairs perfectly with the not-as-sweet cupcakes. They’re seriously some of the best cupcakes I’ve ever made – definitely worth the extra steps it took to make them.

For the Bananas Foster:

For the Bananas Foster:

1. In a saute pan over medium heat, combine the butter, brown sugar, and cinnamon. Cook until butter melts and sugar is dissolved (4 to 5 minutes).

2. Add the banana slices and cook until tender, turning once for 1 to 2 minutes per side.

3. Stir together rum and vanilla. Turn off the burner and add the rum mixture to the pan. Using a long match, light the alcohol by placing the flame just in the outer edge of the pan. Stand as far back as possible. The flame should extinguish in a few seconds. Gently shake the pan from side to side to coat the bananas with the sauce. Spoon the bananas into a bowl and set aside.

3. In a medium bowl, combine the flour, baking soda, and salt.

4. Add flour mixture alternately with sour cream; blend thoroughly but do not overmix.

6. Bake 20 to 25 minutes or until toothpick inserted comes out clean. Cool for 3 minutes in pan on rack. Remove and cool completely before frosting.

1. In a large mixing bowl, beat the softened butter and cream cheese together until fluffy; add the caramel sauce and cinnamon and beat until fully incorporated.

2. Slowly add powdered sugar into the bowl, 1/2 cup at a time and beating after each addition. Continue adding the sugar until you have a thick frosting of your preferred consistency. If the frosting becomes too thick, add a tablespoon or more of milk to thin out.
Posted by Cassie at 3:00 PM

No lie, I was trying to plan our week last night and was really considering bananas foster cupcakes but I'm too scared of the flame! Tell me it's not too scary because these look amazing!

These look delicious, I think I will try them tis week.

these look wonderful! I'll definitely save this recipe for future reference... thanks!

I'm actually a little afraid of the flambeeing... I think my husband might get a little crazy with the torch. might have to try this recipe when he's not around.