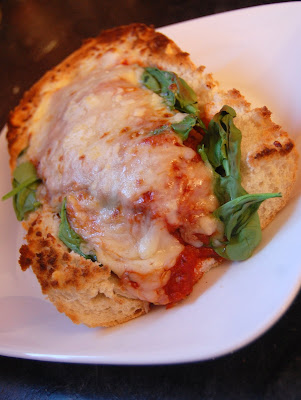 There actually is a piece of chicken hiding underneath all that sauce and cheese -- promise!

I love finding recipes that reinvent classics and make them more accessible for weeknight dinners. No way am I going to take the time to make a complicated chicken parmesan during the week, but taking all the basic flavors and putting them in a sandwich? That I can definitely do. And the results are absolutely delicious. This hits all the same notes as traditional chicken parmesan -- the sauce, the cheese, the breaded chicken -- but it comes together much more quickly.

The recipe just calls for "cooked" chicken cutlets, but I know I would have missed the breading if I didn't add it to the chicken. So I mixed together some seasoned bread crumbs and some parmesan cheese and an egg wash for the chicken before I pan-fried it. It didn't take that much longer than just grilling the chicken would have, and it added a lot of flavor (and probably more than a few calories, but it was worth it in this case). The spinach is a great addition to these sandwiches. This was a flavorful, quick, and delicious meal that's going directly into my regular rotation.

2. Combine breadcrumbs and 1/4 cup parmesan cheese in a large dish. Dip each chicken cutlet in the egg, then in the breadcrumb mixture. Cook in a small amount of olive oil in a skillet over medium high heat until chicken is cooked through and breading is golden and crispy.
3. Slice the bread in half lengthwise to make two pieces. Scoop out the bread to remove the soft inner portion. Place the bread scooped side up on the broiler tray.
4. Spoon 1/4 cup of sauce into each piece of bread. Lay a piece of chicken on top and cover with 1 cup of spinach leaves. Pour another 1/4 cup of sauce over the spinach, then sprinkle each sandwich with 1/2 cup mozzarella and 1 tablespoon parmesan.
5. Broil until spinach is wilted and cheese is bubbly and browned, 4 to 5 minutes. Serve hot.
Posted by Cassie at 11:38 AM

I love love love chicken parmesan. This is such a great idea. I'm adding a loaf of bread onto my shopping list so I can make it!

These look amazing, Cassie! I love chicken parm but like you, don't cook it during the busy week. Thanks for the recipe!!

hey even if it were all sauce and cheese I'd be okay with that!

This looks so yummy! I love how the chicken is nestled down into the bread.