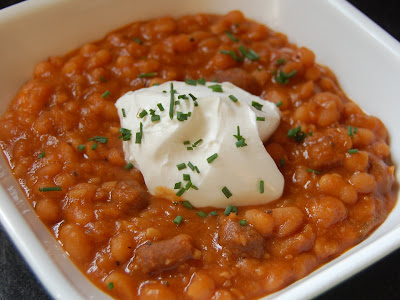 I completely overlooked this recipe in my new issue of Food Network Magazine, so it's a really good thing that Jessie saw it and posted about it, because given my current barbecue obsession I would have hated to miss out on this.

We all liked this dish a lot. It was spicier than I anticipated -- probably due to the seasoning and Worcestershire sauce -- and it just had really great flavor overall. I made a few changes to the recipe; I used a steak seasoning blend instead of BBQ seasoning, maple syrup instead of molasses, and maple- and brown sugar-flavored pork sausage links instead of chicken-apple sausages (the only place I've seen chicken-apple sausages around here is Trader Joe's, and the closest store to us is too far to travel for just one ingredient). My adaptations probably changed the flavor profile of the dish quite a bit, but it was still really good. This dish would be perfect for a summer cookout -- and it's really simple to prepare, too, which is always a plus.

1. Whisk the broth, 3 cups water, tomato paste, brown sugar, syrup, mustard, steak seasoning and garlic in a slow cooker. Add the beans. Push a clove into each onion half; tuck the onions and sausages into the beans in the slow cooker. Cover and cook on high until the beans are tender, about 6 hours. (I cooked mine on low for about 9 hours.)

2. Discard the onion halves. Stir in the vinegar and Worcestershire sauce, then let the mixture sit, uncovered, about 15 minutes. (The longer the beans sit, the more flavorful they will be.)

Glad you liked it too! We actually found the chicken sausages at Sam's Club, and they're pretty good! We do prefer the Trader Joes ones, but the nearest TJ is more than an hour away from us.