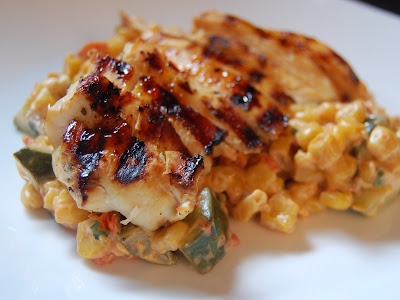 The chicken was good, but not great. I think it would have been better if I'd used our outdoor grill, but we didn't feel like firing it up last night so I cooked this inside. The glaze wasn't quite as flavorful as I was hoping for. The vegetables, though -- they were incredible! I opted to use flat-leaf parsley instead of cilantro (cilantro, usually one of my favorite things, doesn't seem to like me too much lately), and it was delicious. I actually think the vegetables would have been just as good without the cream cheese.

I probably won't make the chicken again -- or I'll tweak the glaze to make it more flavorful -- but I already know that the vegetables are going to become one of my favorite summer sides.

1. Halve tomatoes and cut zucchini into 1/2-inch pieces. In a heavy skillet cook onion in oil over moderately low heat, stirring, until softened. Add tomatoes, zucchini, garlic, corn, and salt and pepper to taste and simmer, covered, stirring occasionally, until zucchini is tender, 25 to 30 minutes.

2. While corn mixture is simmering, prepare chicken. In a small saucepan melt jelly over moderate heat, stirring, and remove pan from heat. Stir in lemon juice and chili powder and divide jelly mixture between 2 small bowls (to prevent the potential contamination caused by uncooked meat juices). Pat chicken dry and brush with jelly mixture from 1 bowl. Season chicken with salt and pepper and grill on an indoor or outdoor grill just until cooked through, about 4 minutes on each side. With a clean brush, coat chicken with jelly mixture from other bowl.
3. Stir cream cheese into corn mixture until melted. Stir in parsley and salt and pepper to taste. Serve corn mixture topped with chicken.
Posted by Cassie at 10:13 AM

I love red pepper jelly and cream cheese, too!! I can't wait to try this recipe. The picture is gorgeous!

You know pepper jelly is excellent with? Peanut butter and bacon! Combine those three things in a sandwich and it's divine!!

I love pepper jelly - gives so many dishes that little something special :)

Sorry the chicken wasnt what you wanted... love the idea of that glaze.. and the veggies sound awesome.

Our friends from Texas send us every year their homemade jalapeno jellies and it's delicious. I'm going to try out your recipe

This sounds good! Believe it or not, I've never had pepper jelly but I am a big fan of dipping crackers into just about anything!

Who needs the chicken with all those other wonderful ingredients?
Photo is great.