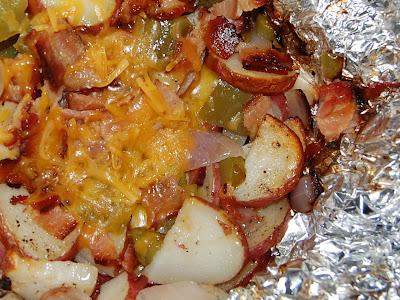 The Saga of the Broken Oven continues. But with the kind of weather we've been having here lately, I'm okay with that -- because it's perfect grilling weather. Last night, Joe and I grilled out for the first time this year. His contribution was two big, juicy steaks (no one can make a steak like he can, I prefer not to even try) and my contribution was these foil packet potatoes.
Probably some of you have been making potatoes this way for years, but this was the first time I'd ever tried. And now that I've tried this method, I want to eat potatoes like this every single day. Really. Every day. They were so, so delicious. There are tons of recipes out there, but I just threw together what I had on hand: baby red potatoes, green peppers, onions and bacon. When they came off the grill, I sprinkled them with cheese and topped them with some sour cream. So, so good. So good. I see many, many foil packets of potatoes in my future.
This recipe makes two healthy-sized portions -- but Joe and I both still wanted more!
Foil Packet Potatoes
source: Cassie
8 baby red potatoes
Half of a red onion, diced
Half of a green bell pepper, diced
6 slices of bacon, fried to desired crispness and chopped
4 tablespoons butter
Olive oil
Salt and pepper
Shredded colby cheese
Sour cream
1. Cut each potato in half lengthwise, then slice into half-moons. Place half of the potatoes in the center of a piece of foil; repeat process with the second half of the potatoes and a second sheet of foil. Top potatoes with red onion, bell pepper, and bacon. Drizzle with olive oil and season with salt and pepper. Top each serving with 2 tablespoons butter.
2. Close the foil packets, being sure to seal all openings.
3. Place on the hottest part of the grill and cook for 40 minutes, turning packets over halfway through cooking.
4. Let cool 10 minutes before opening. Top each serving with shredded cheese and sour cream, if desired. Serve in foil.
Posted by Cassie at 9:50 AM

Email ThisBlogThis!Share to TwitterShare to FacebookShare to Pinterest
Cooking by Category: grilling, my recipe, potatoes, side dish

That sounds really good! Our grill is out of gas, so I need to refill it since it's getting warmer!

This looks great, I make something called a hobo dinner that's fish, potato and vegetables in a foil packet.

These look absolutely delicious. I can not wait for grilling season for my husband to try them, thanks!!

yummy that looks great ! I'm gonna have to try that recipe. That is when the rain stops..

I wish we could grill right now, but instead we got several inches of snow last night! I'm going to come back to this when the snow goes away!

Made these last night and they were super yummy. Thanks for sharing :)

OMG these look amazing! Will make tonight for dinner. I was reading other posts and I don't understand why everyone waits til it's warmer! I grill year round on my good ol 25 year old Weber Grill, and I live in the Cold Tundra of Wisconsin!!!

Will this recipe come out as well if i cook it in the oven?

When do ya add the butter?