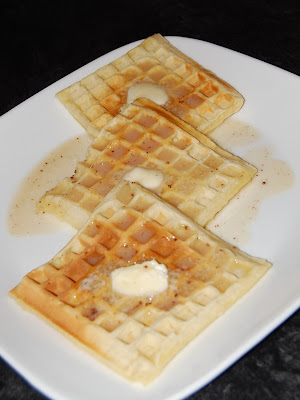 Joe and I used to go out for breakfast every Sunday morning, but in an effort to be more frugal, lately I've been making breakfast at home on the weekends. I used to make breakfast for us a lot, but at some point I just got out of the habit. It's nice to be doing it again.

I found this recipe in one of my trusty Taste of Home cookbooks, and I thought it sounded intriguing. I'd never heard of anything remotely like cinnamon cream syrup before -- but it sounded delicious, and I knew I had to give it a try. Both the waffles and the syrup turned out so well. The waffles were light and fluffy, just as the recipe's name promised, no doubt because of the beaten egg whites. In fact, I'm pretty sure that this waffle recipe is going to be my go-to base from now on. The cinnamon cream syrup was the real star of the show, though. I couldn't use my stovetop to make it (my oven is currently defunct, a nightmare which I'd rather not discuss at this moment), so I used the microwave to heat it up. While it probably wasn't as thick as it would have been otherwise, the flavor was absolutely delicious. I thought it made the waffles taste like cinnamon toast. Joe said it tasted like Christmas, which is absolutely true. I'll definitely be making this breakfast again!

Email ThisBlogThis!Share to TwitterShare to FacebookShare to Pinterest
Cooking by Category: breakfast/brunch, year of the cookbook

I just found your blog after seeing your post on Joy's blog. I live in Ohio also! I am expanding my cooking skills and am enjoying reading through your recipes. I'd like to try this one. I wonder what I could subsitute for corn syrup. I try to stay away from that for health reasons. The syrup sounds delicious.