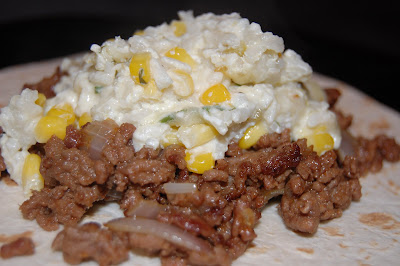 For some reason, I've been on a real Mexican food kick lately. I made this rice last night, and I have a couple of other Mexican-themed dishes on the menu for later this week. Those flavors and textures are what I'm really craving right now.
This rice is definitely a winner. I couldn't get enough of it! As you can see from the photo above, I used it as a filling for our soft tacos, but it's equally delicious by itself (I did some snacking last night, so I know that's true). I loved the sweetness of the corn, the tanginess of the sour cream, and the brightness of the cilantro together; it was such a perfect combination of flavors. The green chiles and pepper-jack cheese added a nice kick, but it wasn't too spicy. This was just delicious, and something I'll definitely be making over and over again!
Mexican Sour Cream Rice
Source: adapted from A Taste of Home Cooking, who got it from ...and a cookie for dessert, who got it from Allrecipes
1 cup uncooked long grain white rice (I used Minute Rice, which worked just fine)
1 14-ounce can chicken broth
1 cup sour cream
1 4-ounce can diced green chile peppers
2 cups shredded pepper-jack cheese, divided
1 1/2 cups frozen whole kernel corn
1/4 cup finely chopped fresh cilantro
Salt and ground black pepper to taste

1. In a large pot, bring the rice and chicken broth to a boil. Reduce heat to low, cover, and simmer 20 minutes (because I used Minute Rice, I decreased the simmering time to about 10 minutes).
2. Preheat oven to 350 degrees. Lightly grease a 1-1/2 quart casserole dish.
3. In the pot with the cooked rice, mix the sour cream, green chile peppers, 1 cup cheese, corn, and cilantro. Season with salt and pepper. Transfer to the prepared casserole dish, and top with remaining cheese.
4. Bake uncovered 30 minutes in the preheated oven, until cheese is bubbly and lightly browned.
Posted by Cassie at 10:20 AM

Email ThisBlogThis!Share to TwitterShare to FacebookShare to Pinterest
Cooking by Category: corn, Mexican, rice, side dish

How funny! I'm just about to post a very similar recipe that I made the other day. Great minds think alike!

Your version sounds more flavorful than mine because it has corn and cilantro. I bet beans would be good in this too.

Tried this a couple days ago and LOVED it! I halved the sour cream and cheese and still thought it was plenty creamy and flavorful!

Our family loved it! Soooo good!

Hey Cassie, hope you had a great Mother's Day! I just wanted to let you know that I blogged about this delish Mexican Sour Cream Rice recipe of yours! We made it and it was mmm to the good! Check out my post if you'd like :)

YUM! Made this recipe last night and it was very tasty! Thanks for another great recipe :)

I just made this tonight to go alongside fish tacos. It was sooooo yummy! Thank you so much for sharing the recipe!