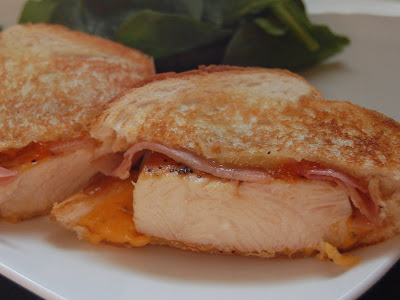 If you were to look at my iPhone, you’d notice right away that the majority of my apps are food- or cooking-related. I can’t even begin to tell you how many great recipe ideas I’ve gotten from my various foodie apps, and these melts are one of them.

This recipe was the What’s For Dinner Tonight feature on the Everyday Food app one day a couple of months ago, and I was immediately intrigued by the flavor combo. It sounded a lot like a chicken cordon bleu melt, but open-faced and with the addition of apricot preserves. I always have apricot preserves on hand because Andrew and I love them on toast, and most of the other ingredients are staples in our house, so I thought this would be a quick and easy choice for a weeknight dinner.

Of course, I managed to screw up the two ingredients I did need to pick up at the store -- a baguette and sharp white cheddar cheese. For some reason I grabbed a loaf of French bread, which was way too small for the melts, and I picked up yellow cheddar by mistake. The cheese mix-up especially irritates me, because I got the really expensive stuff, when yellow cheddar is readily available in cheaper varieties and white cheddar is not. I am such an airhead sometimes.

Anyway, I had to adapt the recipe quite extensively. I decided to make regular old melts on white bread, and I just used the yellow cheddar cheese. I also scrapped the chicken marinade you’ll see in the original recipe (I’ve linked to it) in favor of just seasoning the chicken with salt, pepper, and garlic powder and pan-frying it quickly.

Even though I changed the original recipe a lot, we really enjoyed the end result. I wish I'd pounded the chicken thinner and used a thicker bread, but those are minor quibbles. I loved the sweet apricot preserves paired with the salty ham and sharp cheese; it was a really great flavor profile. I served these with a simple spinach salad, and this actually did turn out to be a quick and delicious weeknight dinner -- even if the end product didn’t look all that much like I thought it would.

1. Season chicken liberally with garlic powder, salt and pepper. Pan-fry over medium-high heat in olive oil until browned and cooked through; set aside.

2. Dividing evenly, spread 2 slices of bread with apricot preserves, and layer with chicken, ham and cheese. Top with another slice of bread. Cook in a skillet or on a griddle until bread is browned and crispy. Slice sandwiches in half and serve.
Posted by Cassie at 11:25 AM

I hate when I make silly shopping mistakes like that...props to you for still turning it into a delicious meal! I love the sound of these sandwiches..remind me of my favorite brie, apricot jam, & apple sandwich from a local bakery!

This sandwich reminds me of the good ol clubhouse we had at home! Far different but always have the mistakes!

I love apricot preserves with chicken! Add some in with the mayo next time you make chicken salad, it's really good.

But it's a sandwich and it's open to interpretation- you're not an airhead.

I am loving the aweet and savory aspect of this. Definitely making this one!