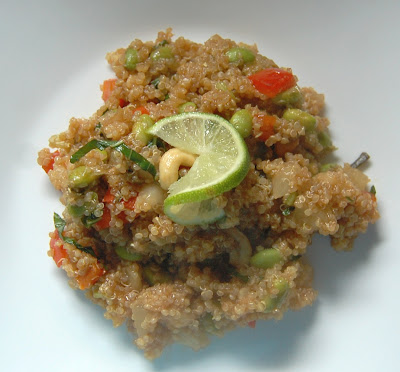 I’ll admit that, when one of the girls in my cooking club proposed that we make vegan food for our next gathering, I was somewhat apprehensive. That’s just not the way my family eats, and it’s pretty far outside my cooking comfort zone. I have nothing against vegans, of course – in fact, I think they have an incredible amount of willpower and are nearly superhuman with their ability to resist cheese, something I could never give up – but I just don’t eat a lot of vegan food.

Although I was apprehensive, I was also excited and to expand my culinary horizons. And it turns out that our vegan meal was probably the best one we’ve had yet. We had falafel, vegan paella made with chickpeas and wheatberries, two kinds of hummus, salsa, vegan chocolate cake, vegan pineapple upside down cake, and – my contribution – this pineapple quinoa.

My cooking club just met on Saturday, so obviously I’m skipping way ahead in my list of recipes to post to share this with you today, because I seriously can’t stop thinking about how delicious it was, even days later. This is probably one of the best dishes I’ve made, ever. It was so flavorful and delicious and healthy, and I just can’t wait to make it again for my family. Even Joe, who is as meat-and-potatoes as they come, sampled some and raved about it.

The pineapple gives a delicious sweetness to the quinoa, and the serrano pepper counterbalances the sweetness with some heat. Cashews provide nuttiness and texture, the edamame provides color and flavor, and the soy sauce provides that salty quality. The basil and lime juice, stirred in at the end, just take the dish over the top into some new realm of taste. It’s seriously so delicious, you guys, I can’t even describe it. I’ll be making this again and again – and feel really good about eating it, too.

1. Combine the quinoa, pineapple juice, 1/2 teaspoon of soy sauce and water in a medium saucepan. Bring to a boil, reduce heat to a simmer, cover and cook for about 15 minutes or until the liquid is absorbed. Remove from the heat, let stand covered for 5 minutes, then remove the lid and fluff with a fork.

2. Toast the cashews in a large skillet over medium heat until golden and fragrant. Remove from the pan and set aside.

3. Return the pan to the stove and increase the heat to medium-high. Heat the vegetable oil. Stir in the bell pepper and edamame and stir fry for about 3 minutes, or until the bell pepper is slightly softened. Stir in the scallions, garlic, ginger, and serrano and cook until fragrant, about 1-2 minutes.

4. Stir in the pineapple, quinoa and basil. Mix well to combine. Stir in the remaining 2 tablespoons of soy sauce and continue to cook for a few minutes more until everything is well blended and heated through. Serve garnished with lime wedges.
Posted by Cassie at 8:00 AM

I've made a similar quinoa but instead of cooking it in pineapple juice/soy sauce I cooked it in coconut milk. YUM!! Then I added pineapple chunks, almonds, celery, and green onions.