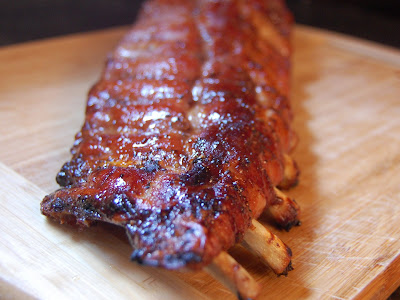 One of the last cookbooks I bought for myself before my self-imposed Cookbook Embargo was Bon Appetit, Ya'll: Recipes and Stories from Three Generations of Southern Cooking. The author, Virginia Willis, was raised in the South but attended culinary school in France, so she has a unique point-of-view. This recipe for ribs is the first recipe I've made from the cookbook, but just looking through it I can tell I'm going to be using it frequently!

Joe and I are very much traditionalists when it comes to ribs, so this recipe was a departure for us. We both really, really enjoyed the end result. The sauce was tangy and sweet, with just the right amount of heat, and the oven-baked ribs stayed nice and tender. These ribs could easily be adapted for the grill, making them perfect for a Fourth of July cookout.

1 cup Coca-Cola Classic
1/4 cup apple cider vinegar
1 1/2 cups firmly packed light brown sugar
1 teaspoon cayenne pepper
1 rack baby back ribs
Salt and freshly ground black pepper
1. To make the glaze, in a small saucepan, bring the Coca-Cola, vinegar, brown sugar, and pepper to a boil over high heat; reduce the heat to medium-low and simmer until syrupy, about 10 minutes. Decrease the heat to low and keep the sauce warm while the ribs cook.
2. Preheat the oven to 325 degrees. Liberally season both sides of the ribs with salt and pepper. Place the ribs on a broiler pan and bake for 30 minutes, glazing the ribs occasionally with the Coca-Cola mixture. Turn the ribs over and continue to cook for an additional 30 minutes, glazing occasionally, or until the ribs are tender and the meat is starting to pull away from the bone.
3. When the ribs are cooked through, set the oven to broil. Liberally spoon half of the remaining glaze over the ribs and broil until glazed a deep mahogany brown, 5 to 7 minutes. Turn over; repeat with the remaining glaze, an additional 5 to 7 minutes. Serve immediately.
Posted by Cassie at 10:24 AM

Email ThisBlogThis!Share to TwitterShare to FacebookShare to Pinterest
Cooking by Category: main dish, pork, year of the cookbook

This is almost the exact same recipe my step-dad uses for the ham we have every.single.holiday. I had to make it for Easter once and I can say with confidence, coca-cola + pork=YUM.