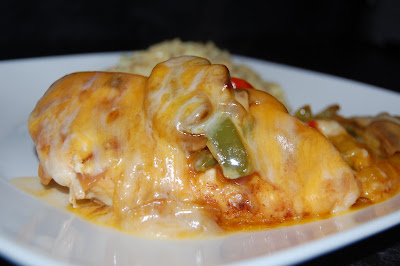 I've been making this smothered chicken dish for years, and I'm ridiculously proud of it because it's one of the first recipes I thought up all on my own. (And I'm sure there are other recipes like this floating around out there, but please: Don't burst my bubble. Let me believe that this is my original creation. Okay? Thanks. Moving on, then.)
When I first started making this, I used a frozen pepper and onion stir-fry blend and a can of sliced mushrooms, but now I use fresh vegetables. But that is the only way I've changed this recipe since I first made it, probably about six years ago. We always eat this with a box of Rice-a-Roni rice pilaf, and any vegetables that aren't eaten with the chicken are scooped up on slices of crusty bread. This is one of Joe's most-requested meals, and one of only a handful of recipes I come back to again and again. We love it!
Smothered Chicken
Source: Cassie
Olive oil
4 boneless skinless chicken breast halves
Salt to taste
Garlic powder to taste
Cayenne pepper to taste
2 tablespoons butter
1 small green bell pepper, sliced into thin strips
1 small red bell pepper, sliced into thin strips
1 small yellow bell pepper, sliced into thin strips
1 8-ounce package sliced mushrooms
1 medium red onion, thinly sliced
Salt and pepper to taste
1 cup shredded cheddar cheese
1 cup shredded Monterey Jack cheese
1. Heat olive oil in a large, high-sided skillet (or electric skillet) over medium-high heat. Season both sides of chicken with salt, garlic powder, and cayenne pepper. Brown chicken in skillet until cooked through; remove from skillet and cover to keep warm.
2. Reduce heat to medium and add butter to the same skillet. Once butter is melted, add bell peppers, mushrooms and onions. Once mushrooms begin to brown, season vegetables with salt and pepper.
3. Return chicken to skillet, nestling it among the vegetables. Top with shredded cheeses and cover. Let stand over low heat for 5 minutes or until cheeses are melted.
Posted by Cassie at 1:56 PM

Cassie- This chicken sure is smothered in goodness.. it looks absolutely delicious!

Love all the fresh good-for-you veggies in this. And cheese! YUMMERS!

Looks like a really tasty dish. I love fresh peppers...

This looks FANTASTIC! I think Nick may even eat it if I play with the veggies a bit. Thanks!

This was delicious! The only change I made was to season the chicken with taco seasoning before cooking instead of garlic powder, salt and cayenne pepper. I loved the mushrooms! I think it was the best part of the dish (but I LOVE mushrooms. lol). Thanks for the recipe!

Great recipe and just in time I have a green, red and cubenelle pepper just waiting to be made into something delicious. Thanks for stopping by my blog!!

Great recipe! I like the simple seasoning so the flavor of the mushrooms, onions and peppers can shine. Made this in a large electric skillet for a group of 8 people and it was so easy and a hit. Yum!