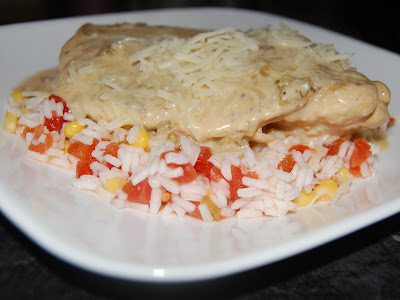 This is one of those recipes that I printed out ages ago and kept meaning to make, and then just never got around to it. I was looking for something quick and easy to make for dinner recently, and this dish came immediately to mind. I made a few changes to the recipe -- I used Emeril's Southwest Seasoning blend instead of creole seasoning, since the rest of the flavors in the dish were distinctly Mexican, I increased the amount of sour cream, and I finished it off with some shredded Jack cheese -- but if I were to make this again, I'd make even more changes to it.
I would definitely remove the chicken from the skillet before I started heating the sauce, because the chicken lost all of its crispy texture as it cooked in the sauce. It completely defeated the purpose of browning the chicken separately first. I'd also use less cream of chicken soup, because while it's a great ingredient to cook with, it doesn't necessarily taste all that great on its own -- and that flavor was definitely prominent in the sauce. I'd add more lime juice to the sauce, too, because I couldn't taste the lime at all in this dish. Some cilantro stirred in at the end would have given this the fresh component I felt it was missing.
I served this over rice that I jazzed up with some frozen corn kernels and a can of diced tomatoes with green chiles. This meal was just okay -- not something I'll rush to make again, but not horrible either.
Chicken with Chile Cream Sauce
Source: adapted from Campbell's Kitchen