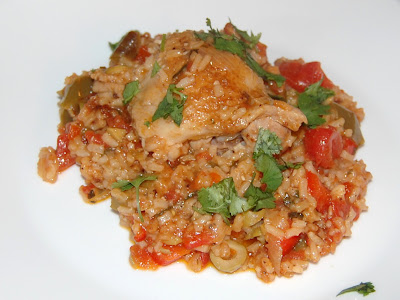 I saw this recipe a couple of months ago on Debbie's blog, and I bookmarked it immediately. I've always wanted to make arroz con pollo at home, but I guess I always thought it was a time-consuming, labor-intensive process. But it really wasn't. This meal came together relatively quickly and was absolutely delicious.

The recipe calls for the thighs to be seared in the bacon drippings so the skin gets crispy, but then they go back in the rice and broth mixture to cook through, and by the time the rice was finished the skin had lost a lot of its crispiness. Next time, I'll either use boneless skinless chicken thighs, or I'll cook the bone-in skin-on thighs completely through, separately from the rice. But that was really the only issue I had with this meal. I omitted the peas because I didn't have them on hand, and I also left out the saffron because honestly, it's not an ingredient I would ever use again. I also added some chopped Spanish-style olives to the rice mixture for the last few minutes of cooking. Joe and I both really enjoyed this dinner, and it will definitely be a repeat in our house. Thanks for the recipe, Debbie!

4 slices bacon
4 chicken thighs with skin and bones
Salt and pepper to taste
Paprika to taste
Dried oregano to taste
Garlic powder to taste
Cumin to taste
2 teaspoons olive oil
1 small sweet yellow onion, diced
2 bell peppers, diced (I used one red and one green)
4 cloves garlic, minced
1 15-ounce can diced tomatoes
2 cups chicken broth
1 pinch saffron (omitted)
1 cup rice
3 tablespoons cilantro, chopped (divided)
1 cup frozen peas, thawed (omitted)
1/2 cup Spanish-style pimiento-stuffed olives, roughly chopped
1. Cook the bacon in a large Dutch oven. Once the bacon is cooked, drain on a paper towel and then crumble. Set aside.
2. Season the chicken thighs with a bit of each seasoning to taste. Cook the chicken thighs, skin side down first, for 4 minutes each side. Remove from pan and set aside on a plate.
3. Add the olive oil to the Dutch oven over medium heat. Once hot add the onion, bell peppers and a bit of each seasoning to taste. Cook, stirring occasionally, until tender. Add the garlic and cook constantly for 60 seconds. Add the diced tomatoes, chicken broth, saffron, rice, crumbled bacon and half of the cilantro. Stir until mixed thoroughly; taste the broth and re-season if needed.

4. Add the chicken in an even layer and simmer over medium low heat, partially covered for 25 minutes. Make sure to stir occasionally so the rice doesn't stick to the bottom of the pan. During the last few minutes of cooking, stir in the olives. Sprinkle the finished dish with the thawed peas (if using) and the remaining cilantro.
Posted by Cassie at 9:36 AM

It looks delicious Cassie and I'm so glad you enjoyed it!

I love arroz con pollo, and yours looks fantastic.