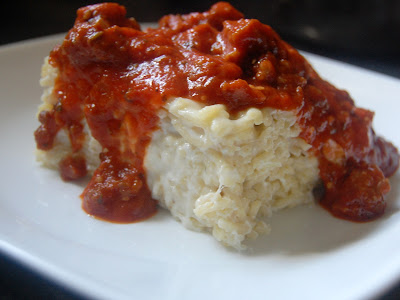 This recipe has been all over Pinterest and the blogosphere recently, and I just have to add my own voice to all of the others that are saying: IT IS FREAKING DELICIOUS. This is a seriously, seriously good dinner. I'm always looking for fun new twists on lasagna since it's one of Joe's favorite dinners, and making it for him the traditional way is an all-day affair. This baked spaghetti tastes exactly like lasagna, with much less fuss.﻿

Now, be forewarned: this recipe makes a ton of food. Yes, it contains 2 pounds of cheese and 1.5 pounds of pasta. I made the recipe as-is, and not only did we have enough for two separate dinners, we also had enough for lunches for all four of us for at least a week. It makes a lot. It can be easily halved if you're only cooking for a couple of people or if you don't like leftovers.

My personal favorite part of lasagna is the ricotta filling, and this recipe has that and then some. The noodles are mixed up with a ridiculously creamy mixture of ricotta, sour cream, half and half, and mozzarella -- and because I have to be me, I threw some cream cheese in there too. The mixture is poured into a casserole dish (a very large casserole dish) and baked, then each serving is topped with a scoop of meaty pasta sauce. It's stupid how good this is. Just stupid.

4. While the pasta is baking, prepare the meat sauce. Melt the butter in a large skillet; add onion and sausage and saute until the meat is cooked thorugh and the onion is translucent. Add spaghetti sauce, adjust for seasoning, and simmer until the pasta is ready.

5. Remove the pasta from the oven and let it rest for 5 minutes. Cut the pasta into squares and top each serving with the meat sauce.
Posted by Cassie at 8:00 AM

Pretty sure that I'm going to have to give this one a try sometime in the very near future.

You and your cheesy cheesy goodness that you post.... Drool.

I have to say, though, that as soon as I feel comfortable eating copious amounts of cheese, I'll be eating the cheesy baked penne with the cream cheese. My favorite cheesy dish, I think.

Every time I see this on Pinterest I wonder if it's any good. Now that you've given it your stamp of approval, I have to try it!

I've made this a bunch and it is delish. I serve it with half covered in Alfredo sauce and the other half in marinara! It is out of this world good!

I make a very similar recipe only with a blend of 5 cheese and no half and half. This one sounds really good though, too! Wonder if you could freeze half of it before it bakes? Frozen cheese does weird things though, so maybe not.