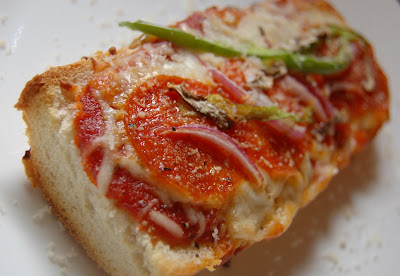 The inspiration for this dinner came from Katie. A few weeks ago she posted about the French bread pizzas she made for dinner, and it was like a light bulb went off in my head. Joe loves Stouffers French bread pizzas. How could I have never thought about making them at home before? I felt so silly, and I knew I had to make some right away.
I used our favorite pizza toppings -- pepperoni, green pepper, red onion, and mushrooms -- but obviously this dinner has about a million variations. I probably could have gone a little heavier on the toppings, but I'll remember that for next time. This was such a simple, delicious dinner -- one I can see myself turning to frequently in the future. Yum!
French Bread Pizzas
Source: inspired by Katie
1 loaf store-bought French bread
1 cup store-bought marinara sauce
2 cups shredded pizza-blend cheese
1/2 of a green pepper, thinly sliced
1/2 of a red onion, thinly sliced
3 button mushrooms, chopped
Italian seasoning to taste
Garlic powder to taste
Salt and pepper to taste
Shredded parmesan cheese
1. Preheat oven to 425 degrees. Slice French bread in half, then cut each half into three slices (for six pizzas total).
2. Top each slice with marinara sauce, cheese, and toppings. Season each slice with Italian seasoning, garlic powder, and salt and pepper.
3. Bake for 15 minutes or until cheese is melted and bread is crisp. Sprinkle with parmesan cheese.
Posted by Cassie at 1:12 PM

What a great idea...it sounds delicious!