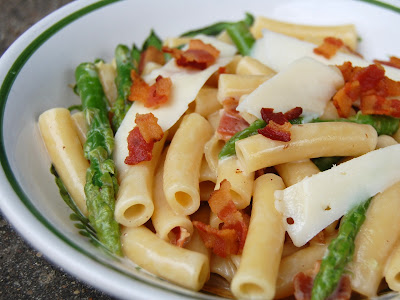 It may be April Fool's Day, but I'm not fooling when I tell you that this is one of the best pastas I think I've ever made.﻿ (Heh. Sorry.) I'm sure you've heard of drunken spaghetti before (spaghetti noodles cooked in red wine), but this recipe uses white wine instead. It adds a completely different flavor than red wine would; it gives the pasta itself a light, crisp, slightly sweet flavor. And don't worry: Since the wine is boiled, the alcohol cooks out, so this isn't a dinner that's going to get you drunk. It probably won't even make you tipsy!

Since it's spring now (FINALLY), I added some asparagus to the pasta, and that made it even better. Asparagus and bacon are a natural pairing, as are asparagus and white wine, so it just all made sense. If you don't like asparagus (hi, Mary!!) you can leave it out. You can also replace the asiago with parmesan; I just used it because I had it on hand, and I liked the slightly funky quality it provided. This dinner was ready in just about 20 minutes, and it's fancy enough for company while still being so simple to prepare. We loved this, and thought the leftovers tasted even better. My kind of meal for sure!

White Wine Pasta with Bacon, Asparagus, and Asiago
seen on A Hungry Teacher and adapted from Framed Cooks

1. Cook bacon in a large deep skillet until crisp. Remove with slotted spoon, leaving the bacon grease in the skillet. Turn off the heat and let the skillet cool down for 5 minutes.

3. Meanwhile, cook pasta in salted water until it just starts to become flexible, about 5 minutes. Scoop out a cup of pasta water. Drain the pasta and add it to the skillet.

4. Add remaining wine and the reserved cup of pasta water to the skillet and return to a low boil. Cook the pasta in the wine until it is done to your liking, tossing it frequently with tongs.

5. Meanwhile, steam the asparagus and reserve.

6. When the pasta is done, add the asparagus, cream, and grated cheese and toss together. Season to taste with salt and pepper and divide among plates. Garnish with bacon and shaved cheese and serve.
Posted by Cassie at 7:00 AM

This sounds so good! Here's hoping I can part with an entire bottle of white wine to make it... :)

Hey Cassie! That looks awesome, I was about to pin it but then I was like, "HHmm, I think I already made something like that." Then, I saw you mentioned me! thanks:) It looks like you enjoyed as we did too!! yum yum;)

eating this now! I added in some gouda i had left on hand though and enjoyed that addition (helped cause I only had parm. for the rest of the cheese). very good recipe!