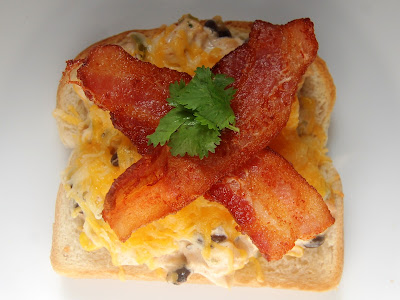 One of my resolutions this year was to take lunch to work as often as possible. This is something that's been an ongoing struggle for me, even though it shouldn't be. I already pack two lunches every evening for the boys -- what's one more? It's just always seemed simpler to buy something somewhere, and of course it is; but it's not healthier or more cost effective. So far this year I've done really well with this goal, largely thanks to meals like this one.

Taking a plain old lunchmeat sandwich gets boring after awhile, so it's nice to have a chicken salad like this in my back pocket. It can be served warm for dinner one night in melt form, and eaten cold in a wrap for lunch the next day. It's equally delicious both ways. I love chicken salad in pretty much any form, but this recipe really takes chicken salad to the next level with its Southwestern spin. It's insanely creamy, slightly spicy, and incredibly flavorful. It's a new go-to for dinners and lunches alike!

Southwestern Chicken Salad Melts
adapted from How Sweet It Is

1. Heat the olive oil in a skillet over medium heat. Add onion and bell peppers, season with salt and pepper, and cook until onion is softened. Remove from heat and cool.

I take lunch to work and it's just the same ole, same ole....this is a great idea and looks delicious....