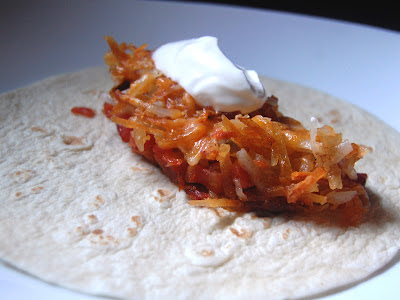 I feel a little silly sharing this recipe with you, since it's really not much of a recipe at all -- but then again, these hashbrown tacos were a huge hit with my family, and they were ready in minutes, so really I just have to share them.﻿

I made these on an evening when I was short on groceries and short on time. I'm not usually very good with just coming up with something for dinner on the fly, based solely on what I have on hand, which is why I meal plan. On this particular evening, however, inspiration struck when I perused the contents of my cupboards, fridge, and freezer. When I served these tacos to my  family, they were initially dubious -- but then they took a bite and realized how delicious they were.

For this version, I mixed the hashbrowns with onions, a can of diced tomatoes with green chilies, and Mexican spices, and topped them with shredded cheese. You could add any type of meat and any veggies you like, and I think the results would be just as delicious. And of course you could always add some eggs! Next time I'm going to try adding black beans, bell peppers, corn and bacon. Yum.

The crispy hashbrowns were such a pleasant surprise inside the soft tortillas, and a dollop of sour cream was the perfect finishing touch. I haven't tried it yet, but I think these would freeze really well rolled up as burritos.

1. Heat the vegetable oil in a large skillet over medium-high heat. Add potatoes in an even layer. Top them with the onions, tomatoes, salt and pepper, and spices. Leave them alone until you can see that the edges are getting crispy.

2. Flip the potatoes after the edges are crisp and let them continue cooking over medium heat until the other side is browned. Sprinkle cheddar cheese evenly over the top and let it melt.

3. Divide the hashbrown mixture evenly among the flour tortillas. Top each taco with sour cream and serve.
Posted by Cassie at 7:00 AM

Love this idea. I cook like this a lot - just using what I have on hand! Last night it was chicken sausage over baked potatoes. The night before it was breakfast pizza with premade dough, bacon, eggs and cheese. SO good. I'm definitely going to keep this dish in mind!