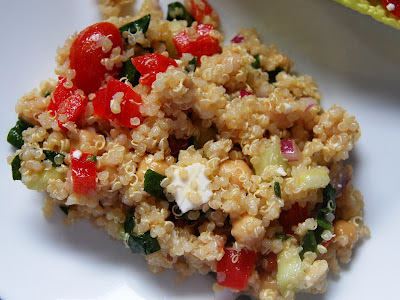 Earlier this week, glasses of wine in hand, my best friend and I watched The Bachelorette, just like we do every week (don't judge). In part of the episode, the bachelorette took two bachelors with her on a date. When they got their meals, both of the guys remarked on the “quinn-o-ah” on their plates. They talked about how much they liked “quinn-o-ah” and how healthy it was. They were, of course, talking about quinoa.

Maybe it was the wine, but I couldn’t stop giggling over their mispronunciation – even though I didn’t really know how to pronounce the word correctly myself until relatively recently, and to this day, when I say “quinoa” in my head, I still pronounce it exactly the way they did. I think it was the fact that both of these guys thought they were pretty awesome, so it was kind of fun to laugh at their mispronunciation when they were so obviously trying to impress a girl.

Regardless of how you pronounce it, quinoa is pretty amazing. In this recipe, it gets a Greek twist with the addition of spinach, chickpeas, feta, cucumbers, and lots of other yummy, healthy ingredients. It’s a feast for the eyes and for the body; it’s just as pretty to look at as it is healthy and delicious to eat, and I happily took this to work for lunch for more than a week. Even Andrew and Will loved this!

(P.S. Add kalamata olives if you’ve got ‘em. Joe hates them, so I left them out, but I missed them!)

2. In a small bowl, combine the lemon juice, vinegar, olive oil, garlic, oregano, and salt and pepper. Stir until combined.

3. Pour the dressing over the quinoa. Stir well to fully coat the quinoa and vegetables.
Posted by Cassie at 8:00 AM

delicious! i love fresh greek flavors during the summer! i'll have to try this! thanks for sharing!

I've been waiting for you to post this. I have a similar recipe for an orzo salad but I need to try quinoa for the health benefits.

Cassie do you mind if I pin this? I wanted to ask first before I did it. I love Quinoa..have you tried the quinoa mac n cheese? it's a family favorite of ours.

Please pin it Sonya, by all means! I would love that! And your quinoa mac and cheese is on my list to try! I'm obsessed with quinoa these days, so I'm sure I'll get to it sooner rather than later. :)

This looks insanely delicious! And I'm addicted to The Bachelorette, too! Arie and Doug are my faves so far. ;) Oh and Chris... I think that's his name? The guy she saw Luke Bryan with?