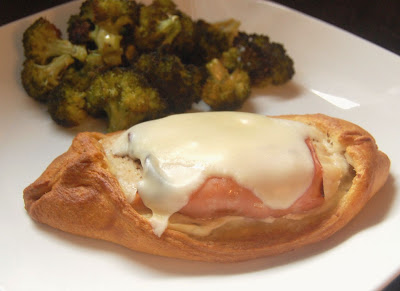 I have a winner winner chicken dinner recipe to share with you today (and no, it’s not a Guy Fieri recipe, but I don’t think he’ll mind if I borrow his expression). This recipe comes from my friend Mercedes over at The Kitchen Life of a Navy Wife (if you haven’t checked out her blog, her food is fantastic, so go now!). I knew we’d love this as soon as she posted it. Cream cheese, chicken, ham, and cheese, all wrapped up in a pretty little crescent roll package? Sign me up!

Not only is this recipe absolutely delicious -- every bit as good as it looks and sounds -- it’s also really forgiving, as I learned the night I made it. Right after I put the chicken in the oven, our power went out. I was upset that dinner was going to be ruined, but by the time the power came back on about 20 minutes later, dinner had virtually cooked itself. Can’t beat that!

The only changes I made to the recipe were to sprinkle the chicken with salt and pepper, and to use provolone cheese instead of Swiss because I had some to use up (and, of course, I used more cream cheese than the recipe called for; are you surprised?). This was a really tasty dinner, so simple to prepare but fancy enough for company. I’ll definitely be making this one again. Thanks for a great recipe, Mercedes!

Chicken Cordon Bleu in Pastry
adapted from The Kitchen Life of a Navy Wife, who got it from Taste of Home

1. On an ungreased baking sheet, separate dough into four rectangles; seal perforations. Spread 1 tablespoon cream cheese lengthwise down the center of each rectangle. Place ham widthwise over dough. Arrange chicken in center of each rectangle. Sprinkle with salt and pepper. Wrap ham around chicken. At each long end, pinch dough together around chicken, forming points.
2. Bake at 375 degrees for 15 minutes or until a meat thermometer inserted in the chicken reads 170 degrees. Top with slice of Swiss or provolone cheese; bake 5 minutes longer or until cheese is melted and pastry is golden brown.

Kitten with a Whisk said...

This is such a cute idea!

I'm so glad you guys liked it! This is definitely one of my family's favorites :)

Looks good love your blog. Everything looks so yummy
Check out my new food blog at http://thedailysmash101.blogspot.com

Wow, what a new take on an old classic. Will be adding to my menu again. We just LOVE your blog!

You say cream cheese and I know I want some!!

I can't wait to try this tonight! Thank you!!