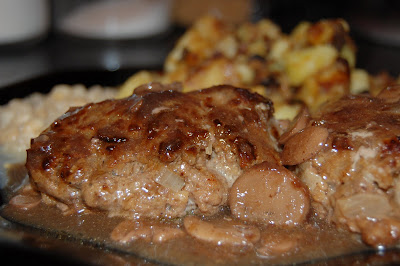 Up until last night, I may have been the only person on Earth who'd never tried salisbury steak. No, not even the TV dinner version! Isn't salisbury steak, like, a staple in most families? Well, it never was in mine, and we never ate TV dinners, so when I saw this recipe I knew I had to try it.

This was quite tasty and made for a nice, old-fashioned dinner last night (which we ate in front of the TV, as fate would have it). My steaks weren't as moist as they probably should have been because I had to omit the milk from the recipe since ours had soured. The sauce was truly delicious, though. We're talking about ground beef here, so it's probably no surprise that the "steaks" put me more in mind of meat loaf than anything. I served this with creamed corn and fried potatoes. I don't know how often I'll be making this in the future, but I'm definitely glad I tried it.
Salisbury Steak
Source: Pillsbury Everyday Family Suppers 2007
For the patties:
1 pound extra-lean ground beef (I used 85/15 ground round, which worked fine)
1/2 cup unseasoned dry bread crumbs
1/2 cup milk
1 egg white
1/4 cup finely chopped onion
1 teaspoon Worcestershire sauce
1/4 teaspoon salt
1/4 teaspoon pepper
1/4 teaspoon garlic powder
For the gravy:
3/4 cup beef broth
1/4 cup dry red wine
1 tablespoon corn starch
1/2 teaspoon dried thyme leaves
1 2.5-ounce jar sliced mushrooms, drained
1. In medium bowl, combine all patty ingredients; mix gently. (Mixture will be moist.) Shape into 6 oval patties, about 3/4-inch thick.
2. Spray large nonstick skillet with nonstick cooking spray. (I used olive oil.) Heat over medium heat until hot. Add patties; cook 3 minutes on each side or until browned. Remove patties from skillet; drain, if necessary.
3. In small bowl, combine broth, wine, cornstarch and thyme; blend well. Pour into same skillet. Cook over low heat until mixture boils and thickens, stirring constantly. Stir in mushrooms. (I actually let my mushrooms saute in the pan drippings before I added the sauce to the pan, because I like to let them get a little color on them.) Return patties to skillet. Cover; simmer about 15 minutes or until patties are no longer pink in center.
Posted by Cassie at 11:13 AM

Email ThisBlogThis!Share to TwitterShare to FacebookShare to Pinterest
Cooking by Category: beef, main dish, mushrooms, year of the cookbook

I've never had this either! Do you think I could substitute ground turkey for the beef?

Yes, you definitely could!

I've never had Salisbury Steak either. I guess I always figured...what's the point?

Such a classic,, yours looks so good. Each time I go on your blog, I want to rummage through your cookbooks.

This recipe gives me warm fuzzies from my childhood. Thanks for sharing.