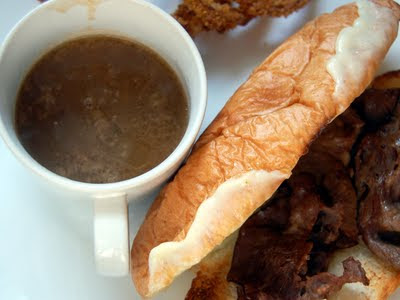 I'm happy to be participating in Taste and Tell's Saturdays with Rachael Ray again! I've been making Rachael's recipes like crazy lately (I recently went through a bunch of my magazines), so hopefully I'll be able to participate for a few weeks to come as well.
Every so often, I make a meal that we enjoy so much that I've made it again and again before I even get the chance to blog about it. That's what happened with these French dip sandwiches, which I've made a handful of times now. They're made from ingredients I always have on hand, they're so quick to make, and they're absolutely delicious. And since they're dippable, my toddler adores them, and I'm always eager to get him to eat something besides peanut butter and jelly sandwiches.
For as quickly as these come together, the flavor of the dipping sauce (or jus, if you prefer) is suprisingly intense, and tastes like it took a lot longer to cook. These oven rings are the perfect accompaniment. Delicious!
French Dip Sandwiches
adapted from A Taste of Home Cooking and originally from 30 Minute Meals
2 tablespoons butter
1 shallot, finely chopped
1 tablespoon flour
1/4 cup dry sherry
2 cans beef broth
1 1/2 pounds deli sliced roast beef
Salt and pepper
4 bolillo rolls, split
8 slices provolone cheese

1. In a large, shallow skillet over moderate heat, melt butter. Add shallots to butter and saute 2 minutes. Add flour to butter and shallot and cook a minute longer. Whisk in sherry or brandy and cook liquid out. Whisk in broth in a slow stream. Bring sauce to a bubble and allow to simmer over low heat until ready to serve sandwiches.

2. Pile meat loosely across your cutting board or a large work surface. Season meat with salt and black pepper. Add to sauce to heat through. Set out ramekins or small soup cups for dipping sauce.

3. Toast the rolls. Using a pair of kitchen tongs, pile meat onto rolls. Top with slices of provolone cheese and broil to melt the cheese. Set ramekins or cups with extra dipping sauce alongside the sandwiches.

I love hot sandwiches of any kind and these sounds tasty. I especially like that they use deli roast beef- love that stuff.

Saw you over on Taste and Tell. I have a binder full of recipes clipped from various magazines. So I have been trying to utilize them so they just don't sit there! Since I have quite a few from RR's magazine I hope to be playing along with the Saturday's with Rachael Ray gang for a few weeks too!

BTW I have been craving sandwiches lately and this one looks great!

French dip sandwiches are one of my absolute favorites! I am bookmarking this right now and will hopefully make it this week!

Cassie - I've said it before, and I'll say it again - we have the exact same taste in food! This sandwich sounds so good, and I can see why you've eaten it multiple times! Thanks for participating in Saturdays with Rachael Ray and I can't wait to see the next recipe(s) you try!

These are causing me some serious drooling! I love French dips and these look amazing :)