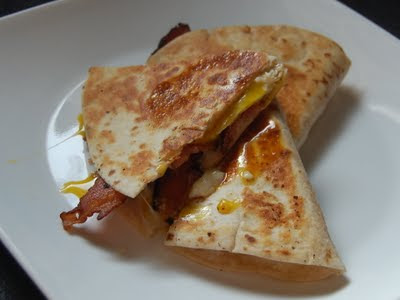 I mentioned in a previous post that I've spent some time lately clearing out my magazine collection. I've been going through old magazines clipping the recipes that I want to keep, and recycling whatever I don't. The first magazine I tackled was Everyday with Rachael Ray -- the subscription I've had the longest. It was pretty time-consuming to clip the recipes I wanted to keep, because there were so many of them! This particular recipe for bacon and egg quesadillas actually appeared in two issues of the magazine, so I knew it must be good!
IT WAS. These quesadillas are a new family favorite for sure, and Joe loved them so much that he didn't even mind when I made them three times in one week. If you know me, you know it's unheard of for me to make a recipe twice in the same month, let alone three times in a week!
There's really nothing not to love about these quesadillas. They're such a fun new twist on bacon and eggs. I love that the eggs are only cooked to over-easy, so the yolks are still soft when you bite into them. I also love that the quesadillas are crisped in bacon grease -- it's not very healthy, sure, but it makes them so perfectly crisp and adds a ton of flavor too. Joe topped his with hot sauce for a little more heat, and I topped mine with sour cream. You could also serve them with salsa if you wanted. What a simple and delicious breakfast, lunch or dinner these were! 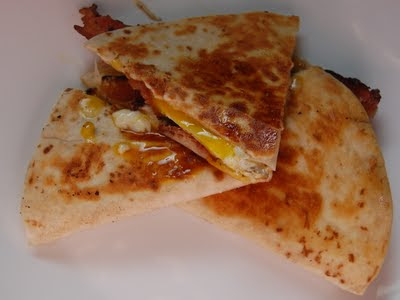 Be sure to check out Taste and Tell's Saturdays with Rachael Ray for more great recipes!
Bacon and Egg Quesadillas
adapted from Everyday with Rachael Ray
4 medium flour tortillas
Salt and pepper
1/2 pound bacon
4 large eggs
4 ounces pepper jack cheese, shredded (about 1 cup)
1. Working in batches, in a nonstick skillet, cook the bacon over medium heat until crisp; drain on paper towels. Leave about 2 tablespoons bacon fat in the skillet, reserving the rest of the fat. Cut the bacon strips in half.
2. Working in 2 batches, in the skillet, cook the eggs over easy, seasoning with salt and pepper to taste; transfer to a platter. Reserve the skillet.
3. Lay the tortillas on a work surface. Sprinkle each with 1/4 cup cheese; top with 1 egg and bacon strips, then fold to enclose.
4. In the same skillet, heat 1 tablespoon reserved bacon fat over medium heat, add quesadillas and cook, turning once, until crisp and golden, about 3 minutes.
Posted by Cassie at 10:48 AM

Saw you over on Taste and Tell. These quesadillas look so good! I am always looking for new breakfast ideas!
I quite the cooking magazine collection too! In fact, I have 2 huge binders full of recipes from magazines, newspapers, printed off the internet, handwritten from friends, etc. I have so many magazine recipes that I decided to do a magazine of the month feature so that I can actually use some of these recipes I have saved. This month is Rachael Ray's magazine. I have enjoyed playing along with Saturday's with RR!

I am making these for breakfast tomorrow morning.. My guys will love them

I'm a sucker for bacon and eggs, especially when they're nice and runny. I'm making these!

I was wondering what I was going to make for dinner tonight - and I think I'll be making these!! I have some bacon that needs to be used, so this is perfect!

Bacon is terrible for your heart, be careful with it: only eat it once per week.

Made these last night! Amazing. I used sharp cheddar since that's all I had, but I don't think it matters what kind of cheese! I'd eat them with any kind of cheese...

So easy to modify for a healthier version by using much less bacon, and not cooking in the bacon grease!