Creamy Succotash with Bacon and Thyme 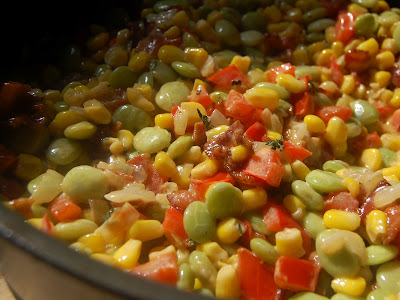 I think lima beans are one of those vegetables that just get a bad rap. Most people just don't like them, for either their texture or taste. Take my husband, for instance. When I told him we were having succotash for dinner, he definitely made a face. He denied it later (after he tasted how delicious this was), but I saw it. He definitely wrinkled his nose in distaste. I guess I never bought into the lima bean disdain, since I used to eat them all the time at my grandma's house, sauteed with onion, butter, and lots of salt and pepper. This was the first time I'd ever made succotash at home, though, so I wasn't sure how it would turn out.

It turned out amazing. Even the boys devoured it, and Joe completely forgot about his dislike of lima beans the minute he tried it. The thyme and bacon definitely add some delicious flavorful elements to the succotash, and I loved the addition of  the cream -- not too much, just enough to give the whole dish a silky texture. This will be a staple summer side in our house from now on.

Creamy Succotash with Bacon and Thyme
adapted from Allrecipes

1. Cook bacon in a large skillet over medium-high heat until crisp. Remove to paper towels to drain. Reserve 1 tablespoon of bacon grease and discard the rest.

2. Melt the butter with the remaining bacon grease in the same skillet. Add onion and bell pepper, season with salt and pepper, and cook until the vegetables are softened.

3. Stir in the lima beans and water and bring to a boil. Reduce heat and simmer, partially covered, for 7 minutes. Add corn, heavy cream, and thyme leaves and cook for 5 more minutes. Stir in reserved bacon and serve.
Posted by Cassie at 8:00 AM

Email ThisBlogThis!Share to TwitterShare to FacebookShare to Pinterest
Cooking by Category: bacon, beans, corn, side dish