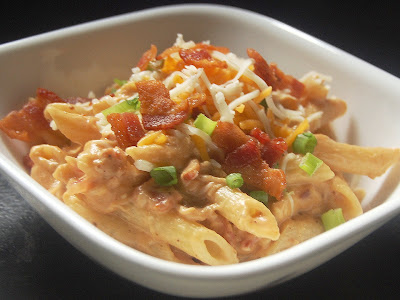 I know I’ve mentioned this before (and those of you who were around here last summer experienced it first-hand), but when I was pregnant with my sweet little Will I could not get enough barbecue. They say you crave strange things when you’re pregnant, and craving barbecue was definitely odd for me since I’d never really been a big fan of it. I liked it okay, I guess, but would never go out of my way to eat it in a restaurant or cook it at home.

But even now that Will is here, I’ve found that I still just can’t get enough of anything and everything barbecued. The craving stuck around! Needless to say, Joe is thrilled about this, since barbecue is one of his favorite things. When I saw this recipe show up on one of my friend Allison’s weekly meal plans, I was instantly sold. I knew we’d love it.

Because I have to be me, I made the recipe just slightly more complicated by cooking the pasta separately, then adding it to the sauce. I also added some bacon to make this even smokier and more delicious. It may sound a little odd -- BBQ chicken in pasta? -- but trust me, this is so good. It’s smoky and creamy and cheesy. It’s pure comfort food, and something that this barbecue-loving family will be indulging in frequently.

1 pound penne or other short pasta
1 pound bacon, chopped
2 boneless skinless chicken breasts, cut into bite-size chunks
1 red onion, diced
Salt and pepper to taste
2/3 cup barbecue sauce
1/2 cup sour cream
1/2 cup shredded mozzarella cheese
1/2 cup shredded sharp cheddar cheese
Green onions, bacon, and shredded cheese for garnish, if desired
1. Cook pasta in boiling salted water according to package directions; drain.
2. Meanwhile, add bacon to a large skillet and cook over medium heat, stirring occasionally, until the bacon is crisp. Using a slotted spoon, remove bacon to paper towel.
3. Add the chicken and red onion to the bacon grease in the skillet, season with salt and pepper, and cook until the chicken is browned and cooked through and the onion is softened. Stir in the reserved bacon, barbecue sauce and sour cream. Once mixed, add in the shredded cheese. Add pasta and stir to combine; heat through.
4. Serve immediately, garnishing with red or green onions, bacon and shredded cheese, if desired.

That looks fantastic! It will probably show up on my meal plan sometime soon too (if I ever get around to actually making a meal plan, that is).

I'm still going strong with the black olive pregnancy craving which is bizarre because I HATED olives before I was pregnant. Now I would eat them on just about anything. Mmmm...

this looks really good! definitely going on my list of recipes to try!

I'm glad you enjoyed it!!!! I love that recipe...might need to make it again very soon!

growing up in Kansas City...bbq never gets old to me!

Creamy, cheesy, and with bits of bacon? This sounds (and looks) delicious!

Yummmm. Looks delicious and my family would love this....another recipe to try!

Looks GREAT -- a combo of many of my favorite things. I love your BBQ recipes!

It's so creamy! This looks yummY! When I was pregnant I craved Taco Bell all the time. Heck, anytime I saw food on TV I wanted it. ha ha!

BBQ Chicken with Bacon Pasta is something I've got to try. Yum!