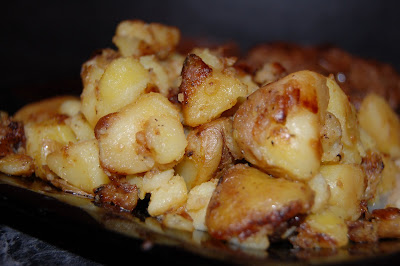 These fried potatoes were part of the first meal I made for Joe after we moved in together -- which was probably the first meal I made for him, ever. I made them to go with chicken cutlets smothered with cheese and mushrooms that turned out very dry and really not very good. The potatoes, though -- they were great. That was seven years ago (Wow. SEVEN YEARS), and my cooking skills have improved a lot since then, but Joe still requests these potatoes frequently. I was planning to make mashed potatoes last night, but discovered that our milk had gone bad, so I made these instead.

I wouldn't even be posting this recipe, but for the fact that Joe asked me to. He thinks they're that good. They're so simple, really, and basically just the way my mom used to make fried potatoes; the only difference is that I chop the potatoes differently than she did, and I leave the skins on. It may sound like a lot of butter, but I've found that the potatoes tend to soak up a lot of butter, so you need that much in order to keep them from burning.
Joe's Potatoes
Source: Cassie
2 to 3 pounds golden potatoes, diced or sliced
1 onion, chopped
1/2 cup butter
Salt and pepper to taste
1. Heat butter in a large skillet over medium heat. (If more liquid is needed later, you can add olive oil.)
2. Add potatoes and onion to skillet and season liberally with salt and pepper.
3. Cook over medium heat, stirring frequently, until potatoes are cooked through and crispy.
Posted by Cassie at 10:57 AM

Email ThisBlogThis!Share to TwitterShare to FacebookShare to Pinterest
Cooking by Category: my recipe, potatoes, side dish

These look really good. And I bet my husband would looooove them. (I would too.) Perhaps for dinner tomorrow, to go with the tilapia I have planned? But oh my heavens an entire stick of butter?!?!

These are really good with a bowl of pintos beans and corn bread.